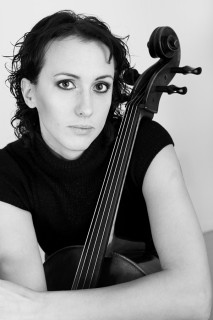 Jana started to play the cello ”quite late”. The first instrument she started to play at the Basic school for music in Opočno was the violin. After one year she was recommended to play a ”bigger” instrument as her fingers were quite long. She started therefore to play the cello with the teacher Anna Vrbová. Thanks to her intensive lessons she equaled her peers at competitions which she won very easily. The greatest success was the first prize in the regional round of Basic schools for music. At that time she regularly took part in orchestral interpretation courses in the whole Czech Republic. In 1996 she started to study with Miroslav Zicha at the Brno Conservatory. As she got to like orchestral music very much she took part in various workshops with foreign orchestras. She graduated from the conservatory with a cello concerto from Victor Herbert which she premiered in our country. In 2002 she started to study at the Janáček Academy of Music and Performing Arts (JAMU) with Miroslav Zicha. In 2000 – 2006 she took part in interpretation courses Ticino Musica in Ascona (Switzerland). Currently she teaches at the Basic school of music in Dubňany and plays with the quartet.