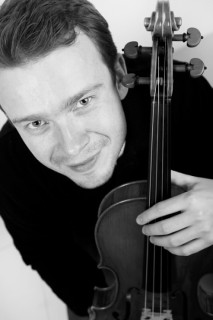 In 1998 David graduated from the Teplice Conservatory with the violin concerto in D major from L. van Beethoven accompanied by the North Czech Philharmonic Teplice. For two years he was a member of this orchestra. Afterwards he studied at the Janáček Academy of Music and Performing Arts (JAMU) with Ladislav Kyselák (member of the Janáček Quartet). During his studies obrained two scholarships at the Toho Gakuen University in Japanese Toyama where he studied chamber and orchestral music. David graduated in 2003 from JAMU cum laude with a recital from the works of R.Schumann, B.Martinů and B.Bartók. After his studies in the concert season 2003 – 2004 he was a member of the Värmlandsoperan orchestra in the Swedish Karlstad. In 2004 – 2009 he was a member of The Osaka Symphoniker Orchestra and in Japan he also performed solo and chamber music.