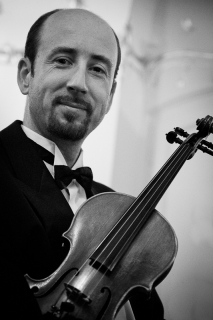 Filip touched the violin for the first time when he was five and he started his violin career as a leader of a children folk music ensemble Břeclavánek in South Moravian city of Břeclav. Afterwards he studied at the Brno conservatory with Jiří Besperát before going on to further studies at the Janáček Academy of Music and Performing Arts (JAMU) under Rudolf Šťastný. Šťastný helped him to discover the beauty and intricacy of Janáček´s violin repertoire. During his studies Filip spent two years in Stavanger (Norway) with a scholarship studying with František Veselka. After graduating from JAMU in 2001 (recital from the works of Grieg, Janáček, Bruch and Ysaye) he was a member of the Värmlandsimfoniettan orchestra in the Swedish Karlstad for six years and he also spent two years in the symphony orchestra in Stavanger. After returning back to the warm Czech lands he worked in the orchestra of the National Theatre in Brno and currently he is a member of the famous second violin group of the Brno Philharmonic Orchestra.